The Little Rock Zoo has a rich history in providing the citizens of Arkansas with a quality recreational experience that educates children of all ages about the importance of wildlife conservation.  Through natural animal exhibition and educational programming, the Zoo serves as a hands-on classroom where learning is fun.  The Zoo is a proud department of the City of Little Rock and is committed to providing the highest quality care for its animals while striving to make every guest experience special.  As one of Arkansas’ most attended attractions, the Zoo also serves as a driving force for economic development.  That’s why the citizens of our community support its state’s largest and only accredited Zoo.

The Little Rock Zoo brought wildlife to the citizens of Arkansas in 1926 with just two animals:  an abandoned timber wolf and a circus-trained bear. Today, the Little Rock Zoo has over 700 animals representing over 100 different species including mammals, birds, reptiles, fish and invertebrates.

The Little Rock Zoo’s first buildings were made of native Arkansan stone and built by the Works Progress Administration (WPA).  These buildings housed primates, reptiles, birds, and big cats.  Today these buildings are still in use and the cat house has been transformed into Café Africa, a one-of-a-kind restaurant with the feel of an African style lodge.  The Zoo is committed to the historic preservation of these beautiful buildings and guests will see many future renovations.

The Zoo’s big cat exhibit was built in the 1980’s along with exhibits for the Zoo’s alligators and great apes. The great ape exhibit is one of the few ape exhibits in the world that displays three of the four species of great apes. Orangutans, chimpanzees, and gorillas.

The Zoo then acquired a new Children’s Farm with an interactive contact yard and train station.  The Zoo’s Board of Governors approved the Zoo Master Plan of improvements in 2001 including a new African Veldt Exhibit and new main entrance.

The 2004 Bond Project brought several renovations to the Zoo including a new main entrance, guest services offices, and gift shop, a new grizzly bear exhibit, the new Café Africa, Lorikeet Landing exhibit, and a cover for the newly renovated Over the Jumps Carousel.

The Arkansas Zoological Foundation is a private 501 c (3) organization raising private funds for Zoo development.  Because of the work of the foundation, the Zoo built Laura P. Nichols Penguin Pointe exhibit featuring African penguins in 2011. In 2012, the Cheetah  Conservation Outpost was opened. The new "Arkansas Diamond" train and tracks were installed in early 2014 and opened to the public in June 2014.

As an accredited member of the Association of Zoos and Aquariums (AZA), the Little Rock Zoo is committed to wildlife conservation, and is a participant in the AZA Species Survival Plan (SSP).  The SSP is a comprehensive population management and conservation program to ensure the survival of select endangered species.  Through being a member of numerous SSPs the Little Rock Zoo has contributed to the survival of many threatened and endangered species.

For more than 90 years the Little Rock Zoo has entertained and educated children of all ages and worked to protect and preserve animals of all kinds.  The Little Rock Zoo is a place of fascination and amazement committed to educational excellence and to changing our world for the better.  Through animal care and education we can make this world better for all creatures, big and small. 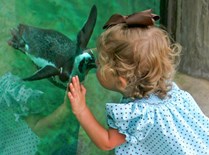